The implementation of the EU F-Gas Regulation, as agreed upon by various European institutions in April 2014, is now under way. The update that the European Union made to the original F-Gas Regulation strengthens the guidelines that were already in place from 2006, adding to them considerably. The EU's F-Gas Regulation – which governs the use of HFCs, principally in the refrigeration industry – will now lead to a controlled phasedown which will be conducted over the next 15 years, cutting the use of high global warming potential (GWP) F-gas by 79 percent by 2030 compared to 2009–2012 average levels. This year, the HFCs placed on the EU market will have to be reduced by seven percent following the HFC phasedown schedule.

However, research conducted by the European Environment Agency (EEA) demonstrated that there is much to be done in this area to achieve this target. According to the EEA, there was a 90 percent increase of bulk imports of HFCs over the course of between 2013 and 2014 compared to the previous period. It is widely thought that companies were stockpiling HFCs before the EU F-Gas Regulation took full effect. Nevertheless, given that HFCs held within pre-charged products will be included in the regulations from 2017 onwards, companies which use them are expected to intensify their reduction efforts in the next twelve months.

The investment required by businesses to take on alternative technology under the EU F-Gas Regulation is going to be a burden for many companies as hydrofluorocarbons, especially those used for refrigeration, are phased out. According to Chris Sturman, the chief executive of the Food Storage and Distribution Federation, the refrigeration industry must look at the long-term benefits. “By taking a lead in technological and chemical modernization,” he said, “the refrigeration sector can lead by example.”

Pointing out that the use of HFCs will radically alter over the course of the next ten years, he warned that the initially slow pace of the phasedown in the first year of the updated F-Gas Regulation belies the true nature of the process. This is because F-Gas Regulation begins at a moderate rate, with a 100 percent baseline of sales based on the previous year. However, as the quota system begins to diminish from 2017 onwards, supply will be reduced. “The effect [of this] ... is already driving up prices fourfold,” Sturman claimed. “As a result, the reality of yearly market restrictions may be double the figure that is officially stated by the European Union.”

To overcome these economic factors, businesses will need to find new ways to reduce their use of HFCs. In the short term, replacing high GWP refrigerants with medium ones can assist with the initial part of the phasedown under F-Gas Regulation rules. The use of ultralow impact refrigerants, like ammonia or CO2, for example, may also become more widespread since these are not affected by the new market restrictions.

“We want to get rid of these chemicals whilst supporting and stimulating the new economy,” said Bas Eickhout, member of the European Parliament. He went on to say that the EU had “set the bar very high” with its F-Gas Regulation and that other parts of the world, principally China and the USA, would have to follow. 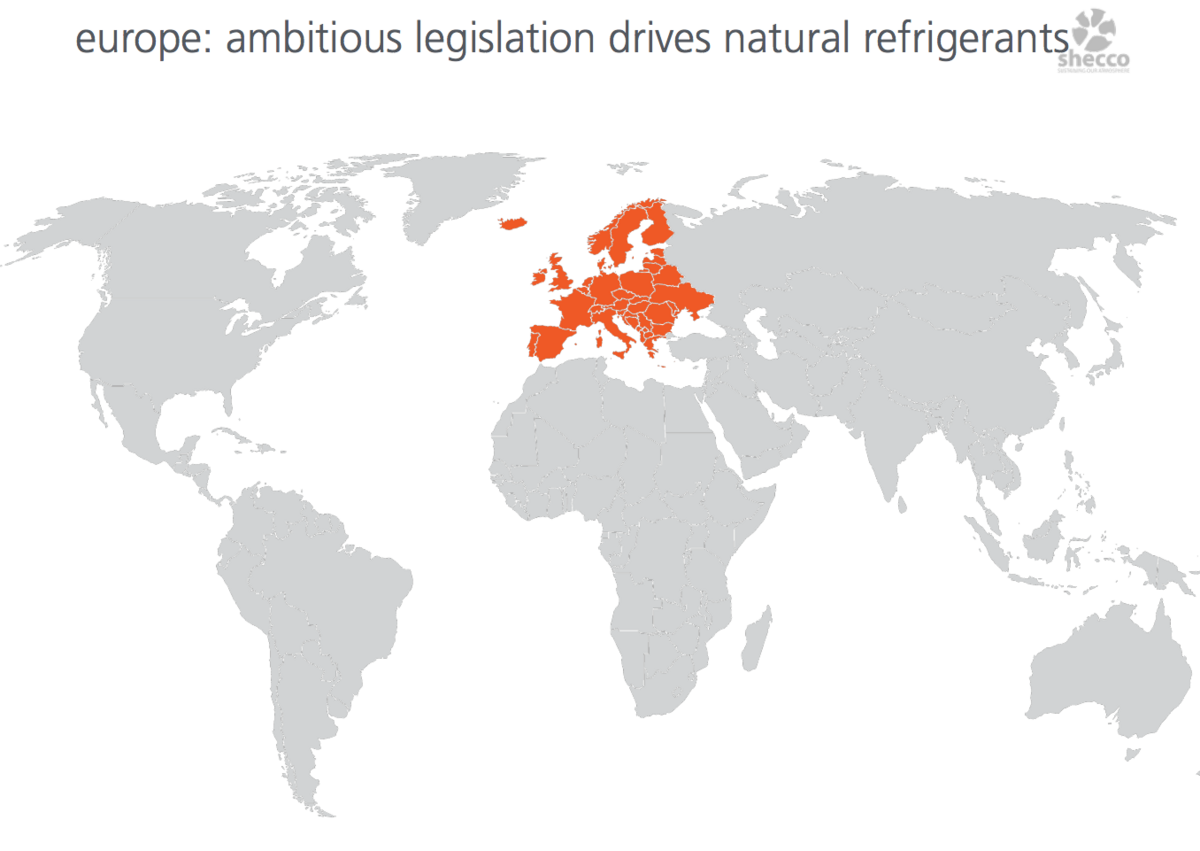 Market and Policy Trends for Natural Refrigerant Technology Around the World